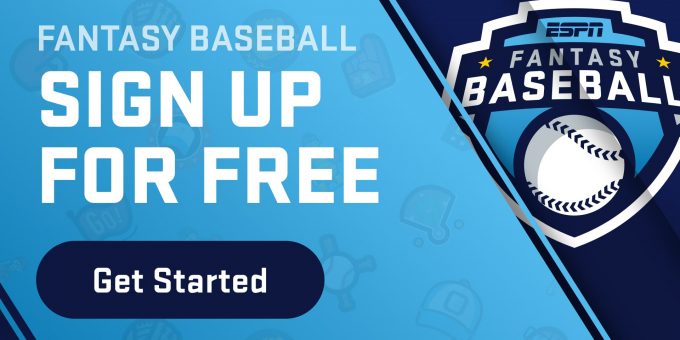 The 2022 fantasy baseball game is live! Get the gang back together, or start a brand new tradition.
Join or start a league for free >>

When healthy, San Diego Padres SS/OF Fernando Tatis Jr. is arguably the top player in all of fantasy baseball — a generational talent providing statistical goodness in each of the five roto categories, while also carrying managers in points formats. Despite persistent shoulder issues in 2021, Tatis smacked 42 home runs, stole 25 bases and in his 130 games was one of the top performers in the sport. So why would anyone not draft Tatis in 2022?

Well, Tatis fractured his left wrist at some point this offseason (he remains unsure of precisely when it happened) and he underwent surgery in mid-March. The Padres expect him to miss half of the season, and that is a best-case scenario.

There is nothing wrong with investing in a few injury risks on a fantasy roster, even one or two that may miss considerable playing time, but fantasy managers may not be discounting Tatis enough. Half of the season and best-case scenario are scary terms. Sure, it is easy to stash a player on your injured list, but what is the opportunity cost lost in whatever round (or with whatever auction dollars) spent on this injured player. Perhaps you can wait three-plus months, perhaps not. Whom else could you have selected in Round 7 or 10 or … whenever?

The annual “Do Not Draft” list for fantasy baseball is often misunderstood, so let us try to offer simplicity here: I am unlikely to invest Tatis in the first 10 rounds of a standard draft. The “value” there does not feel right at all. It’s half the season, and perhaps more. At some point after that, depending on the rest of the roster, I may take a shot. Perhaps it feels right in Round 12. In Round 20, well, of course, there is little risk there. Tatis is so awesome and may have been the No. 1 overall pick in every fantasy format without this injury, but there is an injury, and a serious one at that. We cannot overlook it.

Since the standard ESPN ADP figures are for points formats, which are way different than roto, we will go by NFBC ADP to judge which players I feel are good and bad values. Tatis is, as of this writing, still going in the top 60 since the announcement of his injury and surgery. That’s a hard pass for me — and it has nothing to do with how great the player is, which is also the case with others on this list.

I suppose there is a scenario in which Tatis is so ridiculously awesome over 80-or-so games that he deserves that top-60 love, but there is so much risk here. For one, wrist injuries heal at their own pace and often sap power. Oh, and one more thing: Tatis also has this issue with his left shoulder popping out of the socket sans warning. It has happened more than a few times. There was no surgical procedure to fix it. Anyway, I hope Tatis plays in 120 games and leads the ESPN Player Rater. It just seems a bit unlikely.

Here are some other players whom I would ignore at their current NFBC ADP. We should note that in NFBC tournaments, fantasy managers are more likely to reach on high-upside options (whether they are brittle or not), and catchers and relief pitchers are treated differently, too. Some of these players below have injury issues, and yeah, that means there is a theme here. I can only be honest about seeking out playing time for my teams. Others are healthy, but managers are being way too optimistic about their statistics. We shall go in ADP order.

Mike Trout, OF, Los Angeles Angels: Go ahead, tweet at me. Have at it! I do not care. Trout has played in an average of 106 games over the past four full MLB seasons. Do you realize how few games that is? Oh, and Trout is no longer a stolen base threat. I rank him outside my top 20, but those in NFBC formats have him near the top 10. Is Trout legitimately awesome when he plays? Yes, put him in the Hall of Fame right now. Drafting him over durable, proven statistical options such as Rafael Devers, Mookie Betts, Freddie Freeman, Manny Machado and top pitchers Walker Buehler and Brandon Woodruff (as ADP confirms) is tough for me to defend.

Salvador Perez, C, Kansas City Royals: While many leagues away from ESPN necessitate having a pair of active catchers, here you need only one. I like to wait until the end of the draft to fill that spot. Catchers play less than other hitters do because they need more rest. They get hurt, often playing through pain. Perez was different in 2021, in his age-31 season, somehow getting into 161 games (40 at DH), and of course he registered a career-best 48 home runs. He had never reached 30 in any prior season. Bet the under on 161 games — way under. Perez hit .235 with 27 home runs in 2018, his last full season prior to last year. He rarely walks. He still plays catcher more than just about anyone else does. I do not see a 2021 repeat coming, and would not use a top-50 pick to find out, but in NFBC he goes in Round 2.

Josh Hader, RP, Milwaukee Brewers: I annually stick the first relief pitcher in ADP on this list and Hader gets the nod yet again. Saves are tougher to predict this season. Hader is legitimately great, a strikeout machine showing no signs of concern. I just cannot choose a relief pitcher, whose main fantasy advantage is in one category (saves), over potential five-category hitters such as Starling Marte, Cedric Mullins and Trevor Story. I will draft saves later and take a few chances.

Byron Buxton, OF, Minnesota Twins: Not to belabor the injury points here, but Buxton has, over seven big league seasons, failed to reach 332 plate appearances (which is roughly half a season) in six of them. Buxton played in 61 games in 2021. He looked like the best player in the sport during those games, but then he got hurt and people somehow acted stunned by this. C’mon, already! Projecting 400 PA for this fellow is wildly optimistic, and still he goes in the top 40 of NFBC drafts. That is a ton of risk.

Adalberto Mondesi, 3B, Kansas City Royals: Hey, Mondesi played in 35 games last season, only one short of Trout! Then again, Mondesi is not close to Trout as a hitter — not remotely close. Mondesi is a career .249 hitter with a microscopic walk rate and middling power at best. Could he lead the majors in stolen bases one of these seasons? Perhaps, but he would have to break his trend of missing myriad games. Good luck with that.

Cody Bellinger, OF, Los Angeles Dodgers: The 2019 NL MVP award winner has hit .195 since, succumbing to multiple injuries and looking like someone who needs to be platooned versus left-handed pitching. The Dodgers are deep enough and may well decide to only play him versus right-handers. Bellinger’s NFBC ADP around No. 100 may not be too egregious considering his age and past numbers, but it also seems quite likely that we have already seen his best season. There are safer outfield options, even in ESPN standard leagues, to be found in Round 10 or later.

Blake Snell, SP, San Diego Padres: I simply do not understand what fantasy managers see in Snell. Yes, he misses a ton of bats, but since winning the Cy Young Award in 2018, he is 17-16 with a 4.06 ERA and a 1.28 WHIP, averaging fewer than five innings per start. It was not just the Tampa Bay Rays limiting his innings. The Padres do it, too, because Snell is so inefficient he cannot keep his pitch counts viable enough to pitch deeper into games, and thus win them. It’s not as if he is Jacob deGrom in ERA and WHIP, ya know.

Joey Gallo, OF, New York Yankees: In roto leagues that care about batting average — even in an era in which a .250 team mark may be enough to contend for the top of the category in your league — one cannot stomach what Gallo delivers. Gallo hit .199 last season and .181 the season prior. His career mark is .206. We know that his 2019 season, when he hit a career best .253 (with a .368 BABIP!) is the aberration. Again, in points formats it is different, because walks are king and batting average is not. In roto, it’s a hard pass here, even on a player with 40 HR potential.

Jack Flaherty, SP, St. Louis Cardinals: This right-hander has looked the part of an ace in prior seasons, and even as he missed half of 2021, his numbers were terrific. A right shoulder strain ruined the second half of his season, and when he showed up to spring training, the shoulder in question was, well, definitely a question. The Cardinals have already ruled him out for at least the month of April. Do you want to take a chance in Round 10 that Flaherty will be a healthy ace for even five months? I do not. Shoulder injuries are often worse than elbow ones. Elbows heal with surgery. We have clarity. With shoulders, we often never know what is wrong.

Trevor Bauer, SP, Los Angeles Dodgers: You can Google what he did and why the league keeps extending his administrative leave. There is little indication he is going to pitch again anytime soon.

Gary Sanchez, C, Minnesota Twins: Could either or both of these gentlemen sail past 30 home runs? Sure, they could. Could either hit .199 like Gallo? Sure, and it is not worth it. My advice in an ESPN league is to wait at catcher, perhaps even streaming the position for your one active spot, and avoid batting average anchors like these.