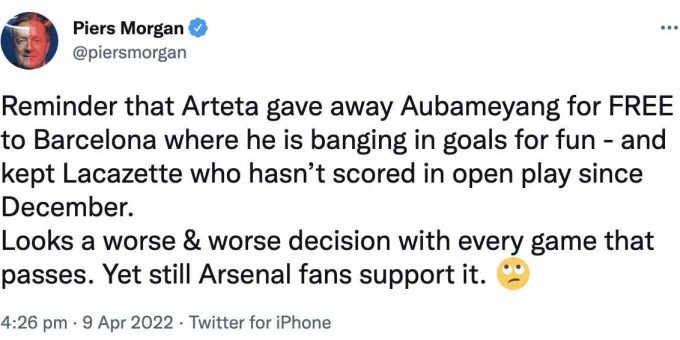 Piers Morgan took to social media to brand Mikel Arteta as “pathetic” after Arsenal slumped to a 2-1 home defeat by Brighton and Hove Albion on Saturday.

The north London side fell 2-0 behind against the Seagulls at The Emirates before managing to pull a goal back through Martin Odegaard in the 89th minute.

However, there was to be no dramatic finale as the Gunners failed to conjure an equaliser to slump to back to back Premier League defeats.

The result allowed Tottenham Hotspur to seize the initiative in the top-four race, with Antonio Conte’s side thrashing Aston Villa 4-0 in the day’s late kick-off to move three points clear of the Gunners in fourth spot.

Arsenal have played one game less than their north London rivals, but Spurs have a superior goal difference heading into the final few games of the campaign.

Celebrity Arsenal fan Morgan was clearly not happy about what he was seeing from his beloved Gunners on Saturday afternoon and he was quick to point the finger at Arteta after the defeat, posting a picture of the Spaniard on Twitter and simply writing: “Pathetic.”

In a separate tweet, Morgan also expressed his frustration at Arteta’s decision to allow Pierre-Emerick Aubameyang to leave Arsenal on a free transfer to join FC Barcelona in the January window.

Morgan wrote: “Reminder that Arteta gave away Aubameyang for FREE to Barcelona where he is banging in goals for fun – and kept Lacazette who hasn’t scored in open play since December.

“Looks a worse and worse decision with every game that passes. Yet still Arsenal fans support it.”

And the former Daily Mirror editor also took another swipe at Arteta as the game approached its conclusion, writing: “FFS. Trust the process? I wouldn’t trust Arteta to boil me an egg at the moment.”

Speaking after the game, Gunners boss Arteta admitted that his side’s performance in the first half against the Seagulls left a lot to be desired.

“The first half was really poor again,” Arteta told his post-match news conference. “The reaction that we wanted to show and everything that we talked about, we didn’t make it happen on the pitch.

“We were sloppy with the ball, we were second best again in a lot of situations, we didn’t show any purpose or build any momentum in the game, play with the right speed and transform the game that Brighton proposed today and with the first chance that they had, the only chance I think they had, they scored a goal.

Arsenal will travel to Southampton in the Premier League next weekend.