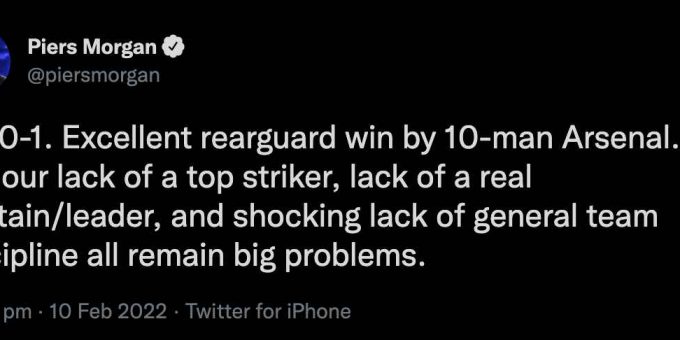 Piers Morgan took to social media to praise Arsenal’s resilience as they claimed a 1-0 victory at Wolves to boost their top-four hopes despite being reduced to 10 men in the second half.

The Gunners headed into the game looking to win their first game of 2022 after a disappointing run of results since the turn of the year.

After an even opening at Molineux, Arsenal took the lead in the 25th minute when Gabriel bundled home from close range to put the visitors ahead.

The north London side were reduced to 10 men in the 69th minute, when Gabriel Martinelli was adjudged to have committed two bookable offences in quick succession – for stopping a throw-in and a foul on Chiquinho – and was sent off.

Wolves dominated the remainder of the game but Arsenal managed to hold firm thanks to some fine saves from Aaron Ramsdale as the Gunners claimed all three points.

The victory lifted Arsenal – who had 41 per cent possession against Wolves – into fifth place in the table and left them a point behind fourth-placed West Ham United with two games in hand.

Celebrity Arsenal fan Morgan was pleased by the defensive display put on by the Gunners but also pointed to some of the issues affecting Mikel Arteta’s side at the moment.

Posting on Twitter after the final whistle, Morgan wrote: “FT: 0-1. Excellent rearguard win by 10-man Arsenal. But our lack of a top striker, lack of a real captain/leader, and shocking lack of general team discipline all remain big problems.”

Arsenal – who only managed two shots on target on Thursday night – have the weekend off and will not play again until their Premier League clash against Brentford at The Emirates on Saturday 19 February.