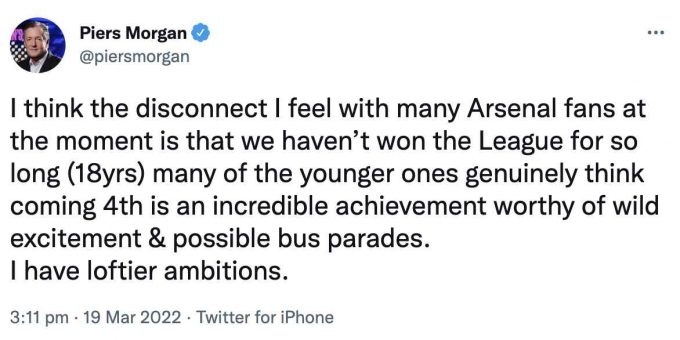 Piers Morgan has taken to social media to admit that he still feels a “disconnect” with many Arsenal fans about the club’s ambitions.

The north Londoners boosted their hopes of finishing in the top four this season with a 1-0 victory at Aston Villa on Saturday afternoon thanks to Bukayo Saka’s first-half goal.

The Gunners’ win followed their 2-0 loss to Liverpool FC last week, a result which ended Arsenal’s five-game winning run in the Premier League.

The win puts Arsenal in the driving seat to qualify for next season’s Champions League as Mikel Arteta looks to steer the club back into Europe’s elite club competition for the first time since 2016.

But although Morgan is encouraged by the progress the Gunners are clearly making under Arteta, he feels that the club should be challenging for major trophies and not simply a top-four finish.

Posting on Twitter after Saturday’s victory, Morgan wrote: “I think the disconnect I feel with many Arsenal fans at the moment is that we haven’t won the League for so long (18 years) many of the younger ones genuinely think coming fourth is an incredible achievement worthy of wild excitement and possible bus parades. I have loftier ambitions.”

Morgan then replied to a tweet from an Arsenal season ticket holder, who was quick to point out that things are looking up for the Gunners right now, despite them being a long way from challenging for the title.

And Morgan replied: “I agree.”

Arsenal are back in Premier League action on 4 April when they travel to take on Patrick Vieira’s Crystal Palace.