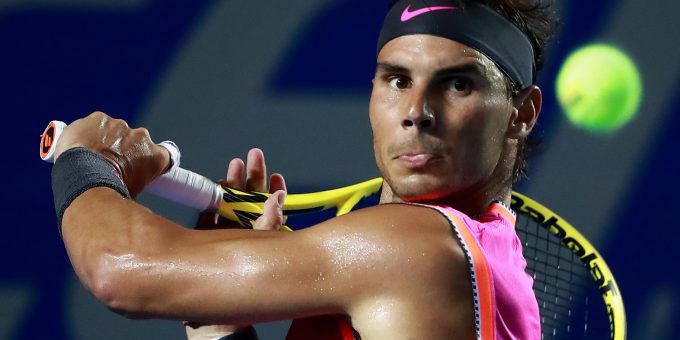 “On hard court over the last 12 months, it’s unsurprisingly Nadal with the statistical edge. The Spaniard has won around 1.5% more service points and almost 4.5% more return points, and these numbers make the market price pretty justifiable.”

Taylor Fritz went one better than last year by winning his semi-final at Indian Wells, shocking Andrey Rublev in the process in straight sets. It was hard to begrudge the American his victory, creating almost treble the number of break point opportunities, putting considerable pressure on Rublev’s serve and winning nine more points in the match.

However, if Rublev was a tough opponent, there’s an upgrade coming in the final – Rafa Nadal. The King of Clay got the better of his countryman, Carlos Alcaraz, in three sets in a match dominated by return – there were 35 break point chances and 11 breaks – with Nadal winning just four more points in the entire match. This was a clash where the pre-match hype was certainly justified.

Both players have ridden their luck to some extent to be here, winning three deciding sets apiece, and three deciding tiebreaks between them, accurately illustrating once again the variance and fine margins which dictate outcomes at the top level of tennis. Nadal is a 1.261/4 favourite to lift the trophy and convert our 3.7511/4 pre-tournament outright.

The duo have met once before, several years ago in Acapulco with Nadal easing to a 6-3 6-2 win, but as a sub 1.101/10 favourite. The price differential between that match and today, several years later, is largely due to the improvement of Fritz who is now inside the top 20.

On hard court over the last 12 months, it’s unsurprisingly Nadal with the statistical edge. The Spaniard has won around 1.5% more service points and almost 4.5% more return points, and these numbers make the market price pretty justifiable. The gap is smaller this year on hard court, with Fritz showing marked improvement, but still Nadal has the better record, not to mention that 20-0 unbeaten record in 2022.

That record is a pretty decent illustration of what Fritz needs to overcome to win tonight.

Nadal on slow hard court is a fearsome opponent, and despite Fritz clearly enjoying Indian Wells too, it would take an off-day from Nadal in conjunction with a top-level display from Fritz for there to be a shock tonight.