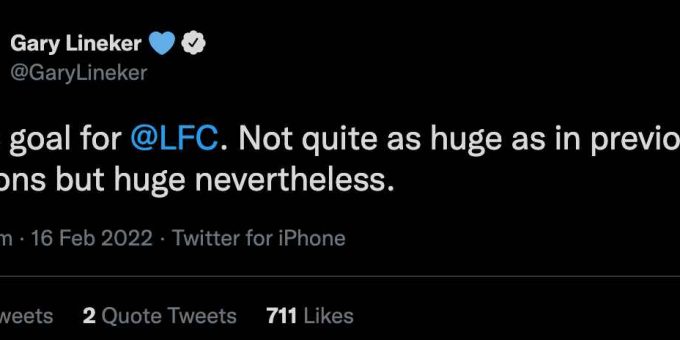 Gary Lineker took to social media to praise Liverpool FC for taking a big step towards the Champions League quarter-finals thanks to a 2-0 victory at Inter Milan on Wednesday night.

The Reds headed into the game looking to claim a positive result ahead of the return leg of the last-16 tie at Anfield next month but knowing that the away goals rule no longer applies in the Champions League after it was scrapped by Uefa last summer.

After a goalless first half in which neither side were able to conjure a shot on target, the Merseyside outfit took the lead in the 75th minute when Roberto Firmino – who replaced Diogo Jota at half-time – nodded home from an Andy Robertson corner.

Liverpool FC then doubled their lead in the 83rd minute when Mohamed Salah drilled home a low finish from inside the box to put the Reds firmly in control of the tie ahead of the second leg on Merseyside on 8 March.

England legend Lineker was clearly impressed by what he saw from Jurgen Klopp’s side following a sparkling second-half performance.

Posting on Twitter after Firmino’s opener, Lineker wrote: “Huge goal for Liverpool FC. Not quite as huge as in previous seasons but huge nevertheless.”

Then, after the Reds had made it 2-0 thanks to Salah’s strike, Lineker posted in a separate tweet: “Yet another goal for Mohamed Salah and that’s got to be an unassailable lead for Liverpool FC. Great changes from Klopp. Saw his team were struggling and sorted it.”

Liverpool FC will now turn their attentions back to Premier League affairs and their home clash against Norwich City on Sunday.