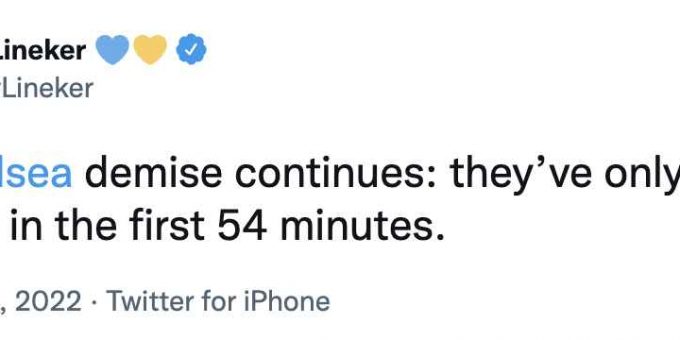 Gary Lineker made light of suggestions that Chelsea FC are in crisis mode after their 6-0 win against Southampton at Stamford Bridge on Saturday afternoon.

The Blues lost 4-1 to Brentford at Stamford Bridge last weekend to cast doubt on their hopes of finishing in the Premier League’s top three.

Chelsea FC’s participation in the Champions League next season looked almost like a certainty before their surprise defeat by Christian Eriksen and his Brentford team-mates last weekend.

The south west London side slumped to a 3-1 loss to Real Madrid in the first leg of their Champions League quarter-final on Wednesday night.

However, Chelsea FC responded with a 6-0 win against Southampton after goals from Marcos Alonso, Timo Werner, Mason Mount and Kai Havertz at St Mary’s.

The Blues cemented a 10-point lead over Arsenal thank to their rout of the Saints ahead of the Premier League run in.

Lineker wrote on Twitter: “The @chelsea demise continues: they’ve only managed to score 6 in the first 54 minutes.”

Chelsea FC had lost back-to-back Premier League games before their 6-0 victory over the Saints.

Tuchel’s side will make the trip to the Spanish capital to take on Real Madrid in the second leg of their Champions League quarter-final on Tuesday night.

The Blues will face Crystal Palace in their FA Cup semi-final at Wembley next weekend.