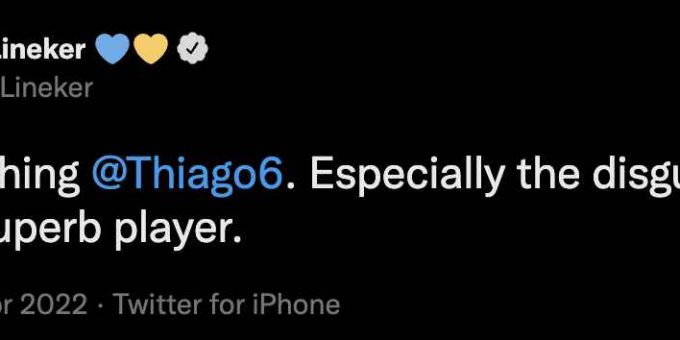 Gary Lineker took to social media to praise Thiago Alcantara for his performance as the midfielder’s sparkling display helped to inspire Liverpool FC to a 4-0 victory over Manchester United at Anfield on Tuesday night.

The Reds secured the three points to move back to the top of the Premier League table and two points ahead of Manchester City, who host Brighton and Hove Albion at The Etihad on Wednesday night.

Jurgen Klopp’s men then made it 2-0 when Salah latched on to Sadio Mane’s clipped pass and fired past David De Gea.

Mane made it 3-0 to the hosts when he expertly fired home Diaz’s low cross in the 68th minute to put the game to bed. And Salah then scored his second of the night in the 85th minute when he dinked a finish home from close range.

Thiago produced an excellent performance in the middle of the park for the Reds and England legend Lineker took to his Twitter account to salute the Spain international during the first half of the game.

Lineker also praised Liverpool FC in general for the way they performed against the Red Devils, posting in a separate tweet: “It’s pretty tasty this @LFC team.”

In the first half of Tuesday night’s game, Thiago had more touches (68) and made more passes (60) than any other player on the pitch.

The 31-year-old midfielder has scored two goals and made two assists in 29 games in all competitions for Liverpool FC so far this season.

After Salah added his second of the night, Lineker also took to Twitter to praise the Egypt international, writing: “You can’t keep a good man down for too long…and @MoSalah is bloody good.”

The Reds are back in action on Sunday afternoon when they take on local rivals Everton in the Merseyside derby at Anfield.