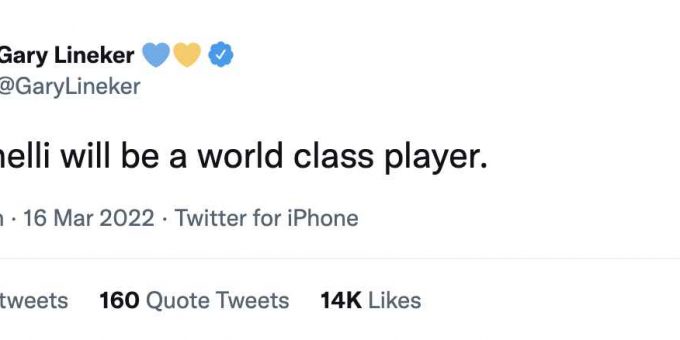 Gary Lineker has declared that Gabriel Martinelli will develop into a “world-class” player in the years to come following his recent good form for Arsenal.

The 20-year-old Brazilian attacker has been a regular fixture in Mikel Arteta’s Arsenal side in recent weeks and he has started 15 of their 27 games in the Premier League this season.

Martinelli has scored one goal and made one assist in his last three games for the Gunners as Arsenal chase a top-four finish in the Premier League.

In total, he has netted five goals and made three assists in 19 Premier League games for the north London side and has caught the eye with some bright displays for the Gunners.

Martinelli played the full 90 minutes as Arsenal suffered a disappointing 2-0 loss to Liverpool FC at The Emirates in the Premier League on Wednesday night.

However, despite the defeat, England legend Lineker was quick to point to one positive for Arsenal fans in the shape of Martinelli’s promising talent.

Posting on Twitter during the second half of Wednesday’s clash, Lineker wrote: “Martinelli will be a world class player.”

Speaking after the game, Arsenal boss Arteta insisted that he was happy with how his side performed against the title-chasing Merseysiders, despite the disappointment of the defeat.

Asked about Martinelli’s performance at his post-match news conference, Arteta said: “I am very pleased with how the team has performed again and how far they have taken the game, because I understand, because I have been there and know how difficult it is to play against this incredible team because they dominate every aspect of the game.

“How we’ve done it and how they have exposed them, how we have created the issues we created, how we dominated, the courage that we showed to play with the ball is not easy at all, believe me.”

Arsenal take on Aston Villa away from home in the Premier League on Saturday lunchtime.