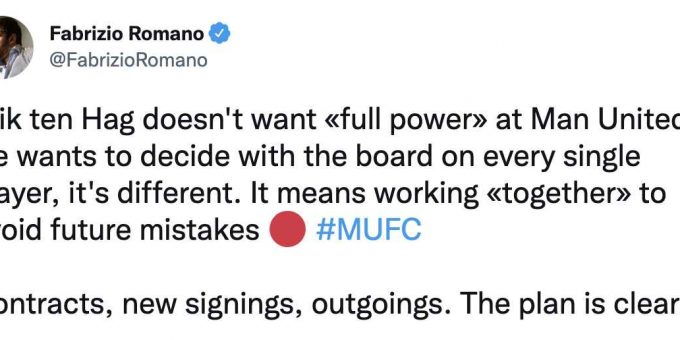 Erik ten Hag is not seeking “full power” at Manchester United and instead wants to work closely with the board on the club’s transfer policy, according to Italian reporter Fabrizio Romano.

Ten Hag has emerged as the heavy favourite to take over as Manchester United boss in the summer as they look to bring in the Ajax manager as their next permanent head coach.

Although there is yet to be any official confirmation from the Old Trafford outfit, it has been widely reported that Ten Hag was interviewed by the Red Devils in recent days and that the club are now closing in on appointing him as their next manager.

Interim boss Ralf Rangnick is set to step aside in the summer and make way for a new permanent boss at Old Trafford, with the incoming manager likely to be focused on overhauling his squad following a disappointing campaign from the Red Devils.

Now, Italian reporter Romano has claimed that although Ten Hag has requested that he be involved in all of the major decisions regarding playing staff at Old Trafford, the Dutchman is not seeking “full control”.

Posting on his Twitter account over the weekend, Romano said: “Erik ten Hag doesn’t want full power at Man United. He wants to decide with the board on every single player, it’s different. It means working together to avoid future mistakes.

Manchester United, who were 3-2 winners over Norwich City at Old Trafford on Saturday thanks to Cristiano Ronaldo’s hat-trick, are back in Premier League action on Tuesday night when they travel to take on Liverpool FC in the top flight.