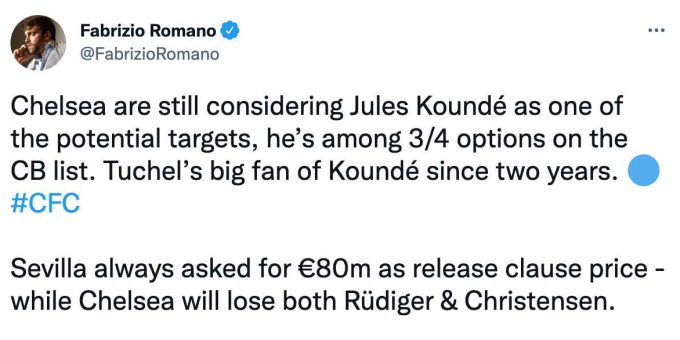 Chelsea FC will consider a move to sign Sevilla defender Jules Kounde this summer, according to Italian reporter Fabrizio Romano.

The south west London side are likely to be linked with a host of potential recruits this summer as they look to revamp their squad after what has been a difficult season for Thomas Tuchel and his team.

Chelsea FC have been operating under the restrictions placed on the club by the British government but the hope is that the London outfit will be under new ownership by the summer.

Sevilla defender Kounde, 23, has long been linked with a move to the Premier League and he was touted as a potential target for the Blues last summer.

Chelsea FC look set to lose Antonio Rudiger and Andreas Christensen, who are both out of contract this summer, so the Blues are likely to be on the lookout for defensive reinforcements.

Now, Italian journalist Romano has claimed that the Blues are looking at Sevilla and France defender Kounde as a potential option for the forthcoming transfer window.

Posting on Twitter, Romano wrote: “Chelsea are still considering Jules Kounde as one of the potential targets, he’s among three or four options on the centre-back list. Tuchel’s big fan of Kounde since two years.

“Sevilla always asked for €80m as release clause price – while Chelsea will lose both Rudiger and Christensen.”

Kounde has been a regular fixture in the Sevilla team this season, scoring one goal and making one assist in 28 league games for the Spanish side. He has also made five Champions League appearances this term.

Meanwhile, Chelsea FC are back in Premier League action on Saturday when they host Wolves at Stamford Bridge.