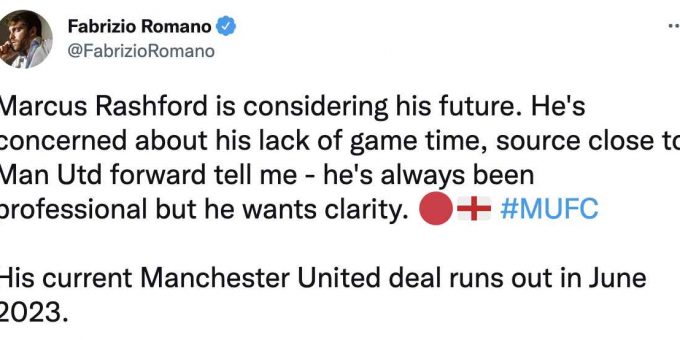 Marcus Rashford is “considering his future” at Manchester United as the clock ticks down on his contract at Old Trafford, according to Italian journalist Fabrizio Romano.

Rashford’s current contract at Old Trafford is set to expire in June 2023, although the club have the option to extend that deal by a further year until 2024.

The England international has struggled to find consistent form for Manchester United so far this season, with the 24-year-old having only managed to net five goals in all competitions.

Rashford has made 24 appearances in all competitions for the Red Devils but has only started 14 of those games and has struggled to hold down a regular spot in the team under both Ole Gunnar Solskjaer and Ralf Rangnick.

According to Romano, Rashford is “concerned” about his situation at Old Trafford and is now considering his future at the Old Trafford club.

The Italian jounalist says that Rashford is seeking “clarity” on his situation at Old Trafford as he begins to think about his long-term future.

Posting on Twitter on Monday morning, Romano said: “Marcus Rashford is considering his future. He’s concerned about his lack of game time, source close to Man Utd forward tell me – he’s always been professional but he wants clarity.

“His current Manchester United deal runs out in June 2023.”

Rashford was a 64th minute substitute for Manchester United on Sunday as the Red Devils suffered a disappointing 4-1 loss to derby rivals Manchester City at The Etihad in the Premier League.

The England international – who made five substitute appearances at Euro 2020 last summer – will be hoping to start when Manchester United host Tottenham in the Premier League on Saturday night.