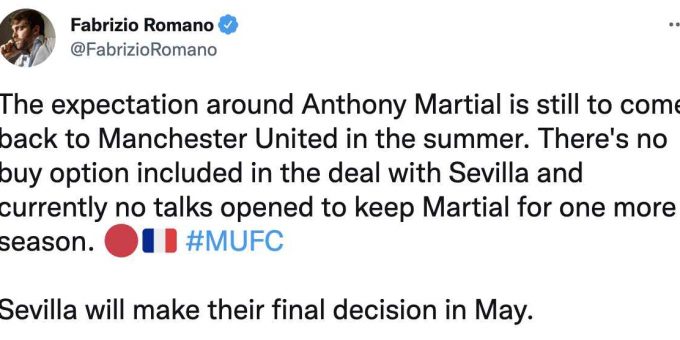 Anthony Martial is expected to return to Manchester United when his loan spell at Sevilla ends in the summer, and no decision has yet been made on the striker’s future, according to Italian journalist Fabrizio Romano.

Martial, 26, was shipped out on loan to the Spanish side in the January transfer window on a six-month loan deal after he struggled to hold down a spot in the first-team at Manchester United in the first half of the season.

The French forward has so far only scored one goal and made one assist in all competitions for the La Liga side this season and he has only featured eight times so far for Sevilla.

As things stand, Martial is scheduled to return to Old Trafford in the summer when his loan deal expires, and Italian reporter Romano has now provided an update on the France international’s future.

Posting on Twitter, Romano said: “The expectation around Anthony Martial is still to come back to Manchester United in the summer.

“There’s no buy option included in the deal with Sevilla and currently no talks opened to keep Martial for one more season. Sevilla will make their final decision in May.”

Meanwhile, Paul Pogba has once again dropped a hint that he is not happy at Old Trafford following the club’s disappointing form this term.

The Red Devils have been knocked out of all the cup competitions and have been left with just Premier League places to play for this term.

Speaking while on international duty with France in recent days, Pogba said: “The season is not over yet, but almost because we don’t have any more titles to play for.

“I want to win titles, to play for something and this year and the last few years we haven’t won a title. It’s sad.”