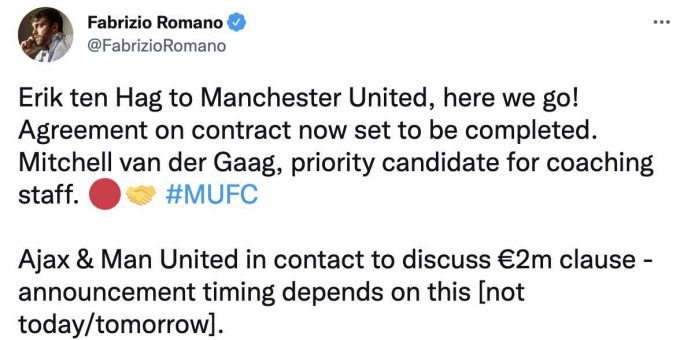 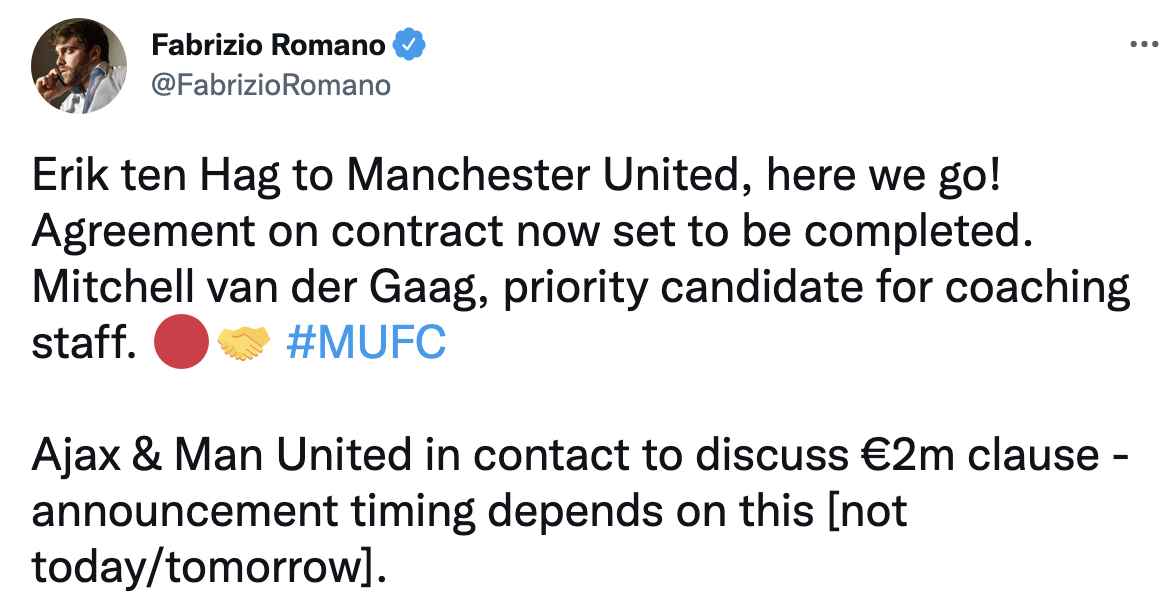 Erik ten Hag is set to be appointed as Manchester United’s new permanent manager in the coming days, according to Italian reporter Fabrizio Romano.

The Ajax boss has emerged as the leading candidate to take over at Old Trafford this summer as the Red Devils look to bring in a permanent successor for Ralf Rangnick.

Ten Hag was widely reported to have been interviewed by Manchester United in recent days as the Red Devils stepped up their search for their next boss.

Now, according to Romano, the club are closing in on the appointment of the 52-year-old Dutchman as their next manager, with the main details of his contract having already been agreed.

Posting on Twitter on Monday, Romano said that the Red Devils are now close to announcing Ten Hag as their new boss, with Manchester United set to now discuss the terms of the Dutchman’s exit from Ajax in the coming days.

“Ajax and Man United in contact to discuss €2m clause – announcement timing depends on this (not today [Monday] or tomorrow).”

The Italian reporter followed that tweet up with a separate update claiming that although the appointment is close, there is unlikely to be any announcement in the next couple of days while the club’s discuss the finer details of Ten Hag’s move.

In the separate update, Romano said: “Manchester United will not announce Erik ten Hag as new manager today – timing will depend on final agreement with Ajax for €2m clause. Matter of time, while contracts are being prepared.

“Talks to appoint Mitchell Van der Gaag as assistant will continue this week.”

Born in Haaksbergen in the Netherlands, Ten Hag enjoyed a long playing career as a centre-half before taking the step into management.

He coached the Go Ahead Eagles, Bayern Munich’s second string and Utrecht before taking over as Ajax boss in December 2017.