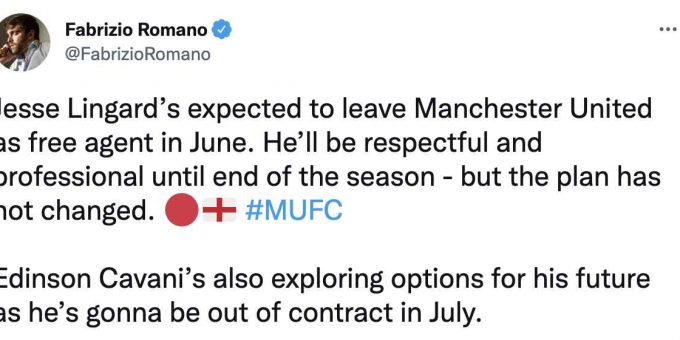 Jesse Lingard is poised to leave Manchester United on a free transfer at the end of the season, journalist Fabrizio Romano has claimed.

The English midfielder’s contract at Old Trafford is set to expire in the summer and as things stand he does not appear to be close to penning a new deal with the Red Devils.

Lingard enjoyed a positive loan spell at West Ham United in the second half of last season and was linked with a permanent move to the east London club, but a switch failed to materialise and he ended up staying at Old Trafford.

The 29-year-old would have been hoping to feature more regularly for Manchester United this season, with Lingard having been limited to just one start in the Premier League so far this term.

He has started just three games in all competitions, making 18 appearances in total – scoring two goals and notching up one assist.

According to Italian reporter Romano, all the signs point to a likely move away from Old Trafford for Lingard in the summer once his contract expires.

The journalist also provided an update on Edinson Cavani, who is also out of contract this summer and looks poised to leave the Red Devils.

Posting on his Twitter account, Romano said: “Jesse Lingard’s expected to leave Manchester United as free agent in June. He’ll be respectful and professional until end of the season – but the plan has not changed.

“Edinson Cavani’s also exploring options for his future as he’s gonna be out of contract in July.”

Manchester United’s disappointing goalless draw with Watford on Saturday left them fourth in the Premier League table. They will attempt to get back to winning ways when they travel to take on leaders Manchester City on Sunday.