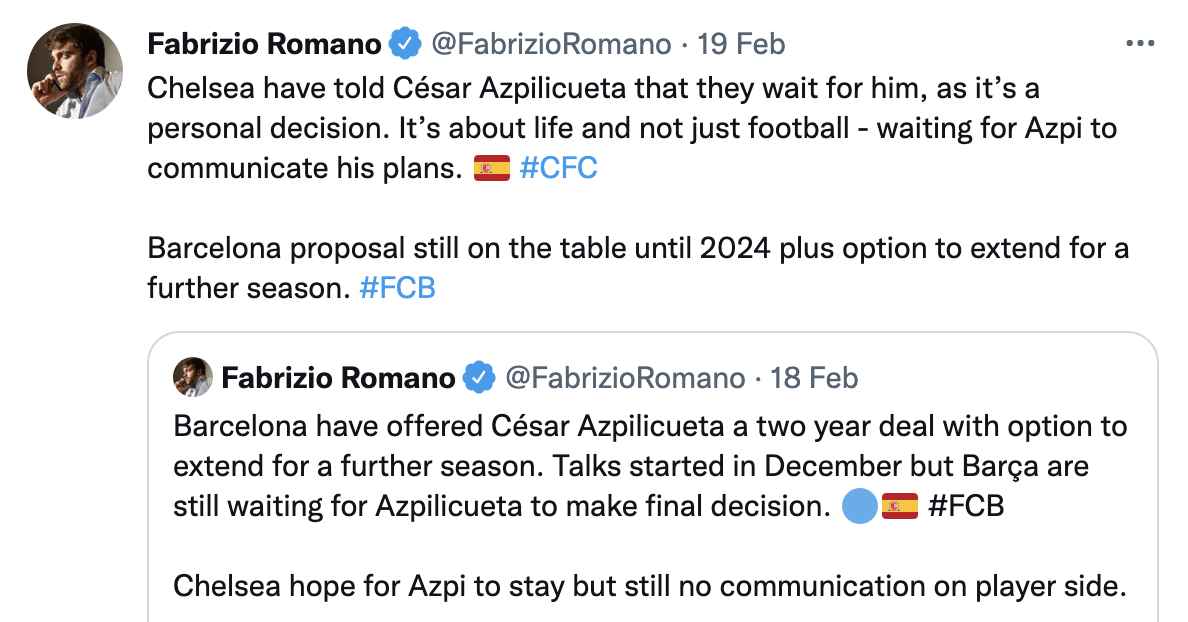 Chelsea FC have told Cesar Azpilicueta that they are waiting for him to make a final decision about his future following interest from FC Barcelona, according to Italian journalist Fabrizio Romano.

Azpilicueta’s situation at Stamford Bridge has been a talking point in recent weeks as he approaches the end of his contract with the south west London side.

The 32-year-old’s current deal at Stamford Bridge is due to expire at the end of the season and he is yet to agree fresh terms with Chelsea FC.

Azpilicueta is one of three first-team Chelsea FC stars who are out of contract this summer, with Antonio Rudiger and Andreas Christensen also in the same position.

According to Italian journalist Romano, Spanish side FC Barcelona have made an offer of a two-year contract to Azpilicueta, with the option to extend for a further season.

Romano has now provided a fresh update, saying that Chelsea FC have told Azpilicueta that they are prepared to wait for him to make a decision about his future, with the player as yet undecided.

Posting on Twitter over the weekend, Romano said: “Chelsea have told Cesar Azpilicueta that they wait for him, as it’s a personal decision. It’s about life and not just football – waiting for Azpi to communicate his plans.

“Barcelona proposal still on the table until 2024 plus option to extend for a further season.”

Azpilicueta has been a regular fixture in Thomas Tuchel’s Chelsea FC side this season, scoring one goal and making three assists in 30 games in all competitions.

He played the full 90 minutes against Brazilian side Palmeiras as he helped them to win the Fifa Club World Cup last weekend.

The Spaniard will be hoping to feature when Chelsea FC host Lille in the first leg of their Champions League last-16 clash on Tuesday night.