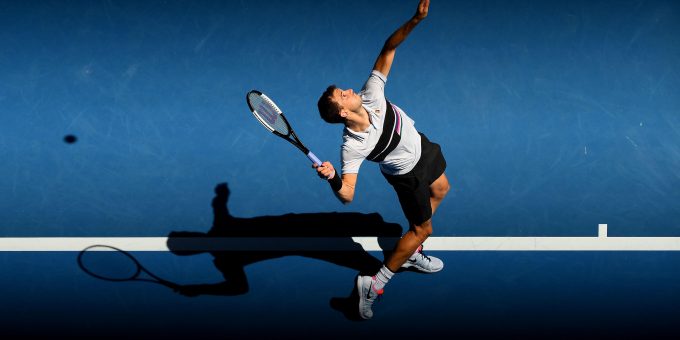 Quarter-final action at the Indian Wells Masters continues today, with two matches to decide who joins the Spanish duo of Carlos Alcaraz and Rafa Nadal in the semi-finals. Dan Weston previews the matches…

“Rublev is yet to drop a set in the tournament so far, with straight sets wins over Dominik Koepfer, Frances Tiafoe and Hubert Hurkacz, while Dimitrov also has the same achievement as well having beaten Jordan Thompson, Alexander Bublik and John Isner.”

There was Spanish success last night in California, with Carlos Alcaraz and Rafa Nadal progressing to the semi-finals at the expense of Cameron Norrie and Nick Kyrgios, respectively. Looking to join them are the four players yet to play their quarter-final clashes, with Miomir Kecmanovi? facing Taylor Fritz, and Andrey Rublev meeting Grigor Dimitrov.

Starting at 1900 UK time is Kecmanovic versus Fritz, with Fritz the 1.684/6 favourite to make the semi-final here again. Last year Fritz was defeated by Nikoloz Basilashvili at the semi-final stage, so he will be looking to progress further this season.

Hard court numbers over the last 12 months suggests he should be favourite to do so, with Fritz having around a 1.5% combined service/return points won percentage edge on hard court this year and a similar edge over 12 months as well on the surface. The market price probably looks a little short to me, but not absurdly so.

Following this, Rublev is a strong 1.374/11 favourite to get the better of Dimitrov, with the duo meeting for the first time since towards the end of 2019. Rublev is yet to drop a set in the tournament so far, with straight sets wins over Dominik Koepfer, Frances Tiafoe and Hubert Hurkacz, while Dimitrov also has the same achievement as well having beaten Jordan Thompson, Alexander Bublik and John Isner.

Therefore, something has to give tonight, and the market is heavily onside with Rublev. On hard court in the last year, he does have a slight edge on service and return points won percentages over Dimitrov, and also does this season but I’m not sure that the price is quite right here.

Dimitrov is a very capable opponent still, despite having slipped down the rankings and numbers-wise looks like a top 20 hard courter at this point in time.

As the handicap market on the Exchange forms in the run-up to the match, we should be able to get just over even money on Dimitrov with a 3.5 game head start, which looks pretty reasonable here given that I don’t think that the ability differential between the two players is quite as big as the market thinks.