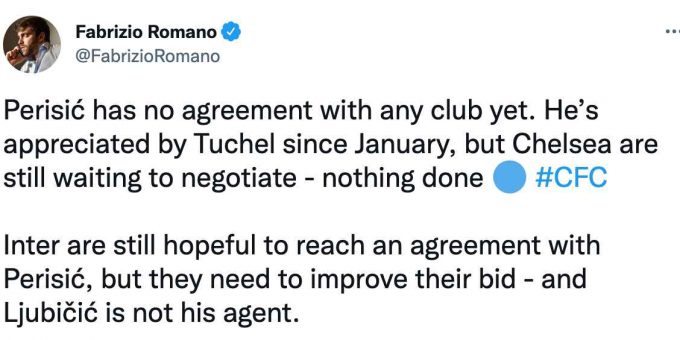 Ivan Perisic is “appreciated” by Thomas Tuchel but Chelsea FC have not yet held any talks about signing the Croatia international, according to Italian journalist Fabrizio Romano.

The 33-year-old attacking midfielder is out of contract at Inter Milan this summer and does not appear to be close to signing a new deal with the Serie A side.

The situation means that Perisic could be available on a free transfer this summer, with the former Wolfsburg winner appearing to be on his way out of the San Siro.

According to Italian journalist Romano, Blues boss Tuchel is a keen admirer of the Croatia international and has been keeping an eye on his situation since January.

However, the reporter also claims that Chelsea FC are “still waiting” to negotiate over any potential deal to sign Perisic in the summer transfer window.

Posting on his Twitter account, Romano wrote: “Perisic has no agreement with any club yet. He’s appreciated by Tuchel since January, but Chelsea are still waiting to negotiate – nothing done.

“Inter are still hopeful to reach an agreement with Perisic, but they need to improve their bid – and Ljubicic is not his agent.”

As things stand, Chelsea FC are unable to sign any new players due to the restrictions placed on the club by the British government. However, the transfer ban is expected to be lifted in the coming weeks when the club’s takeover is finally completed.

Romano’s comments come after reports in Italy suggested that Chelsea FC have already reached an agreement to sign Perisic on a free transfer in the summer.

A report by Sportmediaset, which has been picked up by English media outlets in recent days, suggests that winger is expected to join Chelsea FC, subject to a medical and the final terms of the deal being agreed.

Perisic has scored seven goals and made six assists in 33 Serie A games for Inter this season, and he has also notched up 14 appearances in the cup competitions.

Chelsea FC will host Leicester City in their next Premier League game on Thursday night, before a home clash against Watford on the final day of the season next weekend.