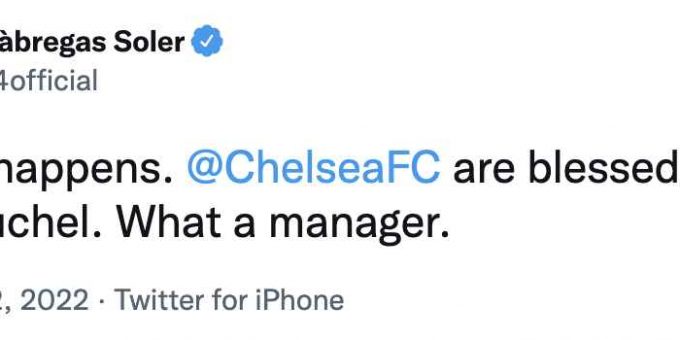 Cesc Fabregas raved about Thomas Tuchel’s impact at Chelsea FC and his tactics against Real Madrid after Chelsea FC beat Real Madrid 3-2 on Tuesday night but exited the competition 5-4 on aggregate.

The Blues appeared to be dead and buried in the last-eight tie after Chelsea FC lost 3-1 to Real Madrid in the first leg at Stamford Bridge last week following Karim Benzema’s sensational hat-trick.

Chelsea FC broke the deadlock at The Bernabeu in the 15th minute when Timo Werner teed up England international Mason Mount to beat former Blues goalkeeper Thibaut Courtois from just inside the penalty area.

Antonio Rudiger produced his fourth goal of the season to give the visitors a 2-0 lead in the Spanish capital after the Chelsea FC defender found himself unmarked in the penalty area and guided his header into the corner of the net.

The Premier League side weren’t to be denied a third goal as Werner showed great tenacity to beat two Real Madrid defenders before finding a finish to give Chelsea FC a 4-3 aggregate lead in the Spanish capital.

However, Rodrygo came off the bench to level the tie on aggregate before Benzema scored the decisive goal in the quarter-final tie in the 96th minute to end Chelsea FC’s resistance.

Former Blues midfielder Fabregas took to Twitter to rave about the genius of Tuchel.

Fabregas wrote on Twitter: “Whatever happens. @ChelseaFC are blessed with Thomas Tuchel. What a manager.”

Chelsea FC will take on Crystal Palace in the FA Cup semi-final at Wembley on Sunday.