It’s a three-event week once again with our Steve Rawlings, Dave Tindall and the rest of our golf betting experts getting stuck into the WGC Dell Matchplay, Corales Puntacana and Qatar Masters…

We’re off to Austin, Texas this week for the first World Golf Championship of the year – the WGC Dell Matchplay – and Steve Rawlings has the lowdown ahead of Wednesday’s start.

Steve says: “Plenty of match play experience is always a plus so focus on the results of previous renewals of this event, the Ryder Cup and the Presidents Cup.

“Being fit and injury-free could be key this week given whoever wins will have to play seven matches over five days with two matches on Saturday and two on Sunday. Players that are fresh, that haven’t been grinding it out every week in tough conditions on the Florida Swing, will probably fare better than those that have…

“The match play is a tricky and infuriating tournament to bet on so arguably the best way to play the tournament is to wait until it starts and to watch the early play. It was soon obvious who the form horses were in 2018. Watson was sensational on Wednesday, playing his first nine holes in 28 strokes to go 6-up on Branden Grace and anyone that jumped on him then will have still got a decent price but even that’s a risky strategy. Kisner lost his first match to Ian Poulter in 2019.

“If you’re planning on betting in-running, prior to the semi-finals in 2018, only 14% of players trailing after nine holes managed to win…

“Paul Casey was in fine form last time out in the Players Championship and he’s twice finished second in the tournament – in 2009 and 2010. He’ll be nicely rested after swerving last week’s Valspar Championship – an event he won back-to-back in 2018 and 2019 – so another fine run in the tournament could be on the cards.”

Steve says: “Lucas Herbert was blown off course in round two of the Players Championship but he was in fine fettle the week before when he finished seventh in the Arnold Palmer Invitational. He’s already a winner on the PGA Tour, having won the Bermuda Championship at the end of October and he’s an interesting runner at a huge price.

“Herbert has been drawn in Xander Schauffele’s group but with huge outsider, Takumi Kanaya, and an out of form, Tony Finau, making up the foursome, progression is far from impossible and if he does get out of the group, he only has to win one knockout match to reward 125/1 each-way backers handsomely with eight places up for grabs with the Sportsbook.

“The place money will ensure a nice return should he progress but I’ve also topped up with a small bet on the Exchange.”

Andy says: “Competitors are divided into 16 groups of four and, over the first three days (Wednesday-Thursday-Friday), will play one 18-hole match against each of the other members of their group.

“Matches during this section of the tournament can be halved and, on Friday evening, the 16 group winners go forward to contest a weekend of knock-out ties. If two or more players finish tied top of any group, they will take part in a sudden-death shoot-out to decide who qualifies for the Last 16.

“These Last 16 games take place on Saturday morning, followed by the quarter-finals in the afternoon. Semi-finals and final are staged on Sunday, along with a third-place play-off match. This means that those who survive through to Sunday will play a total of seven matches over five days…

“Dustin Johnson was champion at Austin in 2017, the current world No 11 hasn’t won on the PGA Tour for 16 months but showed glimpses of good form during the recent Players Championship where he tied-ninth after closing with a 63. Collected a maximum five points at last year’s Ryder Cup.”

Steve says: “Just like in 2019, the wind is going to blow all week long so anyone who can’t remain patient and handle breezy conditions may as well not bother teeing it up. It’s going to be a grind and fine wind exponents should dominate.

“An appearance at last week’s Steyn Championship looks like it may prove to be a positive given all 22 winners to date at this venue played the week before they won here. We have to go all the way back to 2003 to find the last winner, Darren Fichardt, who didn’t record at least a top-10 finish in one of their previous seven starts.

“Most winners here have been playing well before the tournament. Since the out-of-form Fichardt took the title, 14 of the 16 course winners had recorded a top-10 finish in one of their four previous starts and Harding’s 2019 figures read 51-7-11-4-26-MC… 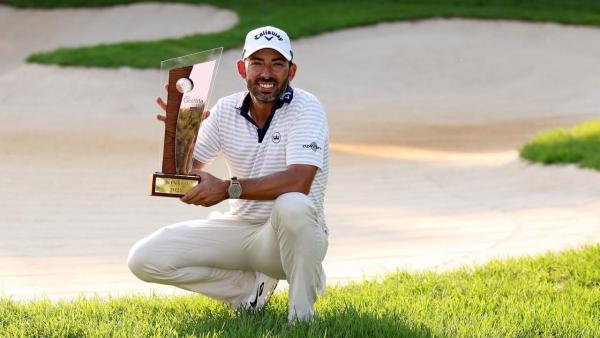 “Pablo Larrazabal missed the cut at the Steyn Championship last week but that was understandable after he’d won the week before. His victory in the MyGolfLife Open didn’t come out of the blue, given he’d finished sixth in the competitive Saudi International and third in the Ras al Khaimah Classic in his two previous starts.

Pablo has plenty of course experience that should stand him in good stead, with the highlight being a fourth place finish in 2018.”

After landing a share of FRL honours with 50/1 Adam Hadwin last week, Dave Tindall has three picks to be first round leader at Doha GC…

Dave says: “The return to Doha GC after a three-year absence will be welcome news for Nacho Elvira. The Spaniard had been a leaderboard regular at the par 72, finishing runner-up in the latest edition there in 2019 and posting sixth place in 2017.

“In the latter he was sixth after round one and the halfway leader while go back to his debut at the course in 2014 and Elvira shot a 66 to sit second on the Thursday leaderboard. More recently, in fact only two starts ago, we saw Elvira burst out of the gates and finish as first-round leader at the MyGolfLife Open in South Africa thanks to a 62.

“Last summer he was also FRL at the Cazoo Open, going wire-to-wire to claim his first DP World Tour win. From his 07:15 tee-time, Elvira looks to have plenty in his favour as he bids for another quick start.”

Matt says: “With the exception of his second round there last year, South Africa’s George Coetzee took to Education City, finishing tied seventh on debut (after a slow start) and opening with a 67 for T10th 12 months later before a 78 on Friday saw him leave early.

“Memories of that last lap will probably only serve to heighten his enthusiasm for heading back to the original venue because down the years he has been absolutely superb there. In fact, in eight visits to Doha GC he’s only twice finished T12th or worse.

“At Doha alone he has been in the places four times in eight, in Qatar that is five in 10 – and he has been inside the top 10 at some point before the cut in eight of those 10 starts in the country.”

Andy has the key course info, the latest on the players’ form and four to watch for Doha this week..

Andy says: “For 2022, the Qatar Masters returns to Doha Golf Club which last hosted the event three years ago. Opened in 1997, Doha is an exposed desert layout located approximately three-quarters of a mile from the Persian Gulf coast.

“If conditions are calm, the course is likely to become a victim of the game’s long-drivers who can play all-out attacking golf on this layout. However, if the breeze picks up, the course is a totally different animal and must be handled with care, demanding a deft touch around the greens…

“Former world number 59 Jorge Campillo was runner-up at Doha Golf Club in 2019, and has tasted victory elsewhere in Qatar too. Seemed to lose his way following the Covid-lockdown of 2020, after which the Spaniard didn’t compete for five months.”

The WGC Matchplay is the main attraction on the PGA Tour this week but the competitive Corales Puntacana R & C Championship kicks off on Thursday, so read Steve’s comprehensive preview.

Steve says: “A number of PGA Tour events are staged at courses similar to this. The Sony Open, the RBC Heritage and the RSM Classic are all held on coastal, wind-affected tracks but the tournaments that correlate the best are the World Wide Technology Championship at Mayakoba and the Puerto Rico Open…

“El Camaleon, home of the World Wide Technology Championship at Mayakoba in Mexico, and the Coco Beach Golf Course, the host course in Puerto Rico, like this venue, are both wind-affected Paspalum grass track whereas the other three tournament venues, Waialae Country Club (Sony Open), Harbour Town Golf Links (RBC Heritage) and Sea Island Resort (RSM Classic) are all Bermuda…

“Swafford was sixth when defending last year and he advertised in no uncertain terms that he can play well at a venue he’s won at before when winning the Desert Classic for a second time at the end of January.

“The 34-year-old Floridian has missed four of five cuts since then, but he was hardly setting the world alight before he won in California two months ago and he’d missed his previous five cuts before contending here 12 months ago. And his form figures before winning the title in 2020 read MC-MC-30-MC-MC-MC-56.”

Andy Swales fills us in on the course for this week’s PGA Tour event in the Dominican Republic, provides the players’ form stats and picks four to watch…

Andy says: “Depending on weather conditions, half of the holes may be affected by the threat of water – although seven is probably a more realistic number.

“The undulating fairways are fairly generous, and will offer golf’s biggest hitters the chance to drive it long – especially if conditions remain reasonably calm. Putting surfaces are large and undulating and, like most coastal venues, the ability to scramble successfully will always come in handy if weather conditions deteriorate…

“It’s rare to successfully defend a golf title at any level but the 34-year-old world No 100 Joel Dahmen will fancy his chances this week. Never lower than tied-13th in four trips to Corales. He tied-sixth at Pebble Beach in February.”