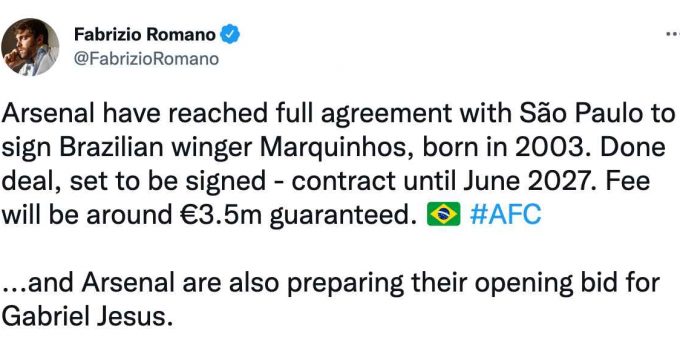 The Italian reporter claims that the move is a “done deal” and says that the 19-year-old is poised to sign a five-year contract with the north London club.

According to Romano, the transfer fee will be around €3.5m, with Arsenal now also preparing their opening bid for Manchester City forward Gabriel Jesus.

Posting on his personal Twitter account, Romano revealed the news to his followers, suggesting that Arsenal are already keen to get their summer transfer business under way.

“…and Arsenal are also preparing their opening bid for Gabriel Jesus.”

Marquinhos, who was born in April 2003 in Sao Paolo, only made his professional debut for Sao Paolo last year, and he has represented Brazil at both Under-16 and Under-17 level.

Arsenal have been strongly linked with a move to sign Gabriel Jesus from Manchester City in recent days, with the Brazilian’s future at The Etihad seemingly in doubt following the Citizens’ move to land Erling Haaland from Borussia Dortmund – a transfer which was confirmed last week.

The 25-year-old Brazil international has scored eight goals and made eight assists in 27 league games for Pep Guardiola’s men this term.

Meanwhile, the Gunners are currently preparing for their final Premier League game of the season at home to Everton on Sunday afternoon.